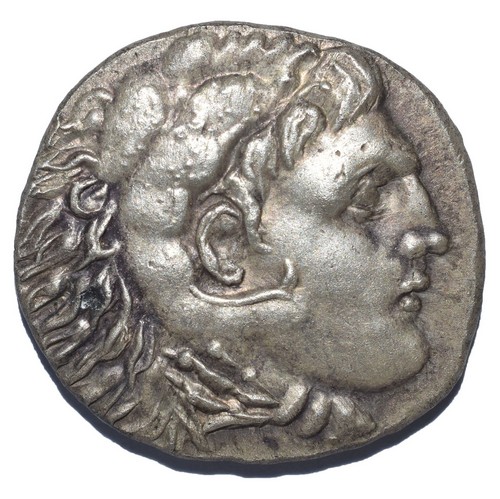 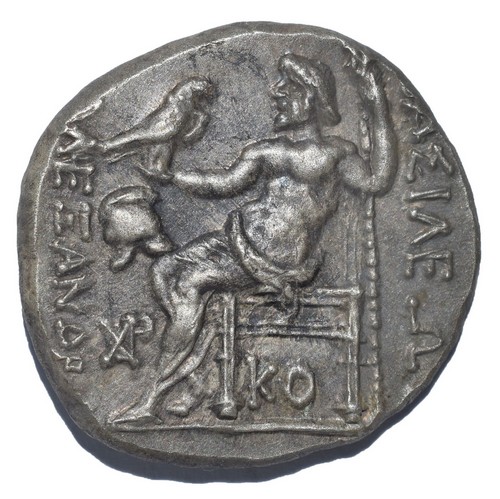 Please note that these are illustrative photographs and due to the fact that all of our coins are handmade you may not receive the exact same coin in terms of shape and color. You still should expect to receive a coin 99% similar to the one in the photographs, as the coins are struck from the same coin die.
Silver Greek Tetradrachm (29.6mm, 17.20g.) in the name and types of Alexander III of Macedon, Mesembria mint, struck 175-125 B.C. References: Price 1072, MÃ¼ller 486, SNG Cop 718, Karayotov 63.

Mesembria, Nesebar Bulgaria today, was a Doric settlement on a Black Sea island just off mainland Thrace. Thrace was invaded by the Galatians in 279 B.C. Only the wealthy coastal cities, including Mesembria, withstood their attacks. Following that chaos, rule of Thrace was divided between many tribes. Philip V, 221 – 179 B.C., tried to regain control of the area for the Macedonian Kingdom, but his success was limited and short lived. Mesembria was taken by Mithradates VI in the First Mithradatic War and surrendered to Rome in 71 B.C. The city struck Alexandrine tetradrachms as early as 275 B.C., more than 50 years after Alexander’s death, and probably issued the very last Alexandrine tetradrachms struck anywhere, possibly under Roman rule as late as 65 B.C.
This issue was hand struck (hammered) in Plovdiv, Bulgaria (ancient Roman province Philippopolis). It goes without saying you always get the exact item in the picture.
The early Macedonian kingdom did not have sufficient access to mines to be able to mass-produce influential coinage. However, when Philip II rose to power in 359 BCE, he recognized the importance of mining and prioritized the acquisition of metals in his early conquests.
After defeating Amphipolis and Crenides, Philip was able to secure a consistent annual supply of nearly 30 metric tonnes of precious metal, striking them into new, iconic coinage. This production volume made Philipâs coins immensely popular throughout the world.
His son, Alexander the Great, continued Philipâs coinage and improved upon it, refocusing the silver mintage on a tetradrachm based on the Athenian weight standard that could be used easily throughout Greece. For more than two hundred years, Alexander the Great Tetradrachms would be minted at a prolific rate, sourced from his fatherâs mines in Thrace and Macedonia as well as the new bullion Alexander received when he conquered the Persians.
A single coin represented approximately four dayâs pay for a common laborer, so Alexander also minted bronze coinage for small transactions in local markets. However, Alexander the Great Tetradrachms were the most famous of his denominations, becoming one of the staple coins of the Greek world through their use in substantial purchases, international trade, and for mercenary payments.
Design:
Obverse side
Bust of Herakles right, wearing Nemean Lion skin, scalp over head, forepaws tied at neck
Legend:
Anepigraphic