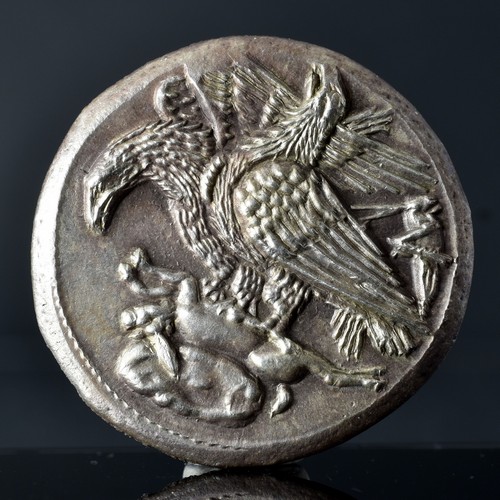 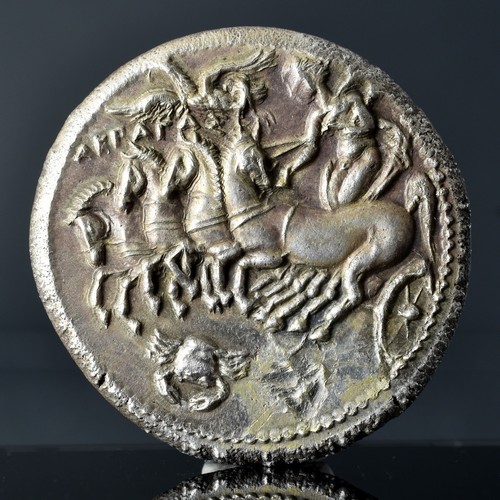 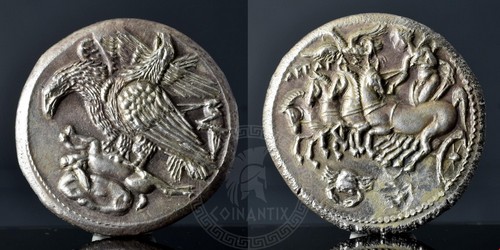 Silver Greek Dekadrachm Akragas (Sicily), struck 408-406 B.C. The sublime Akragas dekadrachm is often described as arguably the most prestigious and important coin in existence. The unsigned dies are attributed, by style, to the masters Myron (obverse) and Polyainos (reverse).

In this period the coinage reflects the splendor to which Agrigentum had now attained. There are 12 known examples in the world in total, with six being held in museums. Until it was sacked by the Carthaginians in 406 BCE, Akragas (now Agrigento) was one of the largest and wealthiest cities in the Greek world.
The late 5th century silver coinage of Akragas has long been credited as being among the most artistic of all Greek coins. The series included the famous Akragantine dekadrachm and was originally believed to commemorate the victory of Exainetos of Akragas at the Olympic Games in 412 BC. More recent scholarship indicates, however, that these coins were part of the preparations of the city for the upcoming clash with Carthage. The war ended in disaster, as in 406, the Carthaginian army took Akragas by storm and burned it to the ground – a blow from which the city never fully recovered.
After the memorable destruction of Agrigentum by the Carthaginians in B.C. 406, the surviving inhabitants appear to have returned to their ruined homes; but until Timoleon’s time the town can hardly be said to have existed as an independent state. No new coins were issued in the interval, but the bronze money already in circulation seems to have been frequently countermarked in this period.
Timoleon, circ. B.C. 338, recolonized the city (Plut. Tim. 35) with a body of Velians, and from this time it began to recover some small degree of prosperity.
DESIGN:
Obverse side
Quadriga to left driven by river-god Akragas or Helios; crab below with amphora next to him; above, eagle of Zeus carrying serpent
Legend:
AKPAΓAΣ

Reverse side
Two eagles standing right on dead hare lying on rock, the eagle in foreground with wings closed and head raised, the other with wings spread and head lowered; grasshopper behind
Legend:
Anepigraphic