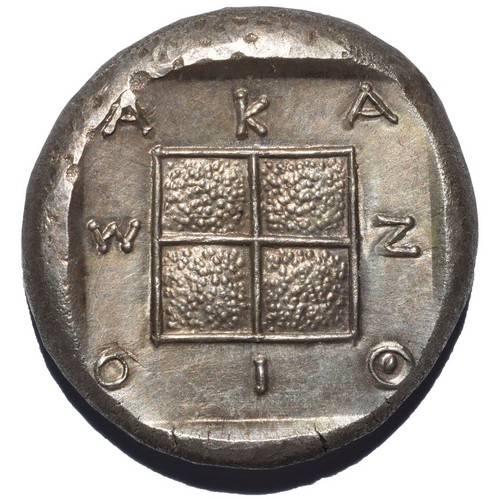 Of the Archaic Greek coinages, the imagery of Acanthus is among the most striking and influential, depicting a lion attacking a bull, a motif soon adopted by several other cities. Lions prowled the hinterlands of Thrace and Macedon in this era and Herodotus recounts an episode when the baggage train of the Persian King Xerxes’s army was set upon by lions during its march from Asia Minor into Greece proper. This particular rendering of the life-and-death struggle is especially powerful, with its yin-yang juxtapositioning of the two animals struck in living high relief.
This issue was hand struck in Plovdiv, Bulgaria (ancient Roman province Philippopolis). It goes without saying you always get the exact item in the picture.
The ubiquitous and persistent theme of the lion-bull combat can be traced back to the figurate art of the third millennium, where the geometrical motifs are replaced by narrative symbolic representations, and the scene is characteristic of Near Eastern art in its infancy. The earliest known depiction occurs on a ewer found at Uruk dated to the latter part of the Protoliterate period, circa 3300 BC. That ewer has a relief depiction of a lion attacking a bull from behind (see Henri Frankfort, Art and Architecture of the Ancient Orient, 1963). The scene became widely distributed by 500 BC, featuring prominently in the Achaemenid Empire, and in particular at the palace of Darios in Persepolis, where it occurs no fewer than twenty seven times, including on the main staircase leading to the imperial complex. Its frequent appearance in key locations strongly suggests an important symbolic significance, which unfortunately has not survived antiquity in any explicitly clear form. Explanations for the symbolism and its power over the ancient peoples who reproduced it with prodigious enthusiasm have ranged from it being an expression of royal power, to it being an astronomical allusion, as well it being an embodiment of the constant struggle between civilisation (represented by the domesticated bull), and nature (represented by the untameable lion). This latter argument may well hold true for the Mesopotamians of Uruk, who it is known took a rather grim view of the world, seeing it as a battleground of opposing powers. One interpretation that has gained traction in recent years is that the motif is apotropaic in nature, serving to ward off evil in a similar function to the gorgoneion, which like the lion attack motif is very prevalent in ancient Greek coinage, though there is little evidence to support such a notion. G. E. Markoe (‘The Lion Attack in Archaic Greek Art’, Classical Antiquity Vol. 8, 1, 1989) convincingly suggests that a more likely explanation may be found in the examination of archaic Greek epic poetry, particularly in Homeric literature, wherein a lion attacking cattle or sheep is repeatedly employed as a simile for the aggression and valour of combatant heroes. In notable passages, Agamemnon’s victorious advance against the Trojans in the Iliad (11.113ff and 129) and Hektor’s successful pursuit of the Achaeans (15.630ff) are both likened to a lion triumphing over its hapless prey. In both of these cases the allusion is completed by the defeated being compared to fleeing prey animals. In all, there are twenty five examples present in the Iliad of heroic warriors being compared to leonine aggressors, with the victims variously compared to boars, sheep, goats, bulls or deer. The repetition of this literary device is clearly demonstrative of how deeply rooted the imagery was in the Greek (and perhaps more generally human) consciousness. Of further and great significance is the involvement of the gods as the primary instigators of heroic leonine aggression in almost every case, and as it is made clear that the lion itself is an animal that is divinely directed to its prey (11.480, by a daimon), so then is the lion attack a metaphor for divinely inspired heroic triumph.
DESIGN:
Obverse side
Bull with head raised, crouching to left, attacked by lion leaping on its back to right
Legend:
Anepigraphic