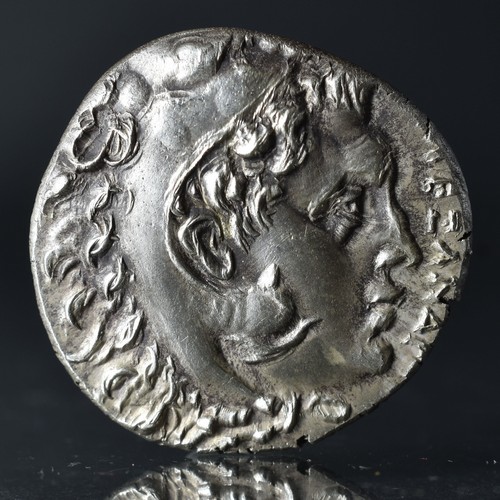 Extremely Rare Silver Greek Tetradrachm Agathocles, King of Bactria (now Northern Afghanistan), ‘Pedigree’ commemorative of Alexander III of Macedon, struck 185-170 B.C. References: Bopearachchi Série 12B; Bopearachchi & Rahman 163; SNG ANS -; MIG Type 142 var.; MACW -. The Indo-Greek king Agathocles ruled in Bactria and also south of the Hindu Kush mountains around 185 to 170 BCE. He produced some of the most interesting coins of the Bactrian series, both because of their artsitry and their content. He was one of the first Greek kings (perhaps the very first) to issue coins in the “Indian” style: square in shape, to an Indian weight standard and with legends in the local script, Kharoshthi. He also issued a remarkable series of coins known as the “Pedigree” series, in which he honors his predecessors on the Bactrian throne, starting with this coin where he honors Alexander the Great himself! The coin follows the obverse and reverse images of the coins of Alexander, but adds an Alexander legend on the obverse, while preserving the Agathocles legend on the reverse.

This coin was incredibly important in unlocking the mystery of the pedigree coins. Until its discovery, numismatists were having a hard time figuring out what these coins signified, and most thought they meant that Agathocles had been co-ruler with all these different kings. But once the Alexander coin was discovered, it became apparent that these coins were intended to establish Agathocles’s pedigree. Why exactly Agathocles issued these coins is not known for certain, but we can speculate about it. The Bactrian Kingdom was founded when the local Seleucid governor, Diodotus I, broke away from his Seleucid masters and declared himself independent. Around the time of Agathocles, it appears that a scion of the Seleucid royal family, Eucratides, attempted to lay claim to the throne of Bactria, and indeed he did so successfully. Perhaps it was in this context that Agathocles attempted to establish his own pedigree, since he faced a rival who claimed royal descent himself. Eucratides also issued some pedigree coins featuring his mother, who belonged to the Seleucid royal house.
Design:
Obverse side
Head of Heracles right wearing a lion skin
Legend:
AΛEΞANΔPOY TOY ΦIΛIΠΠOY

Reverse side
Zeus seated left holding an eagle and leaning on a scepter; monogram below throne
Legend:
BAΣIΛEYONTOΣ AΓAΘOKΛEOYΣ ΔIKAIOY