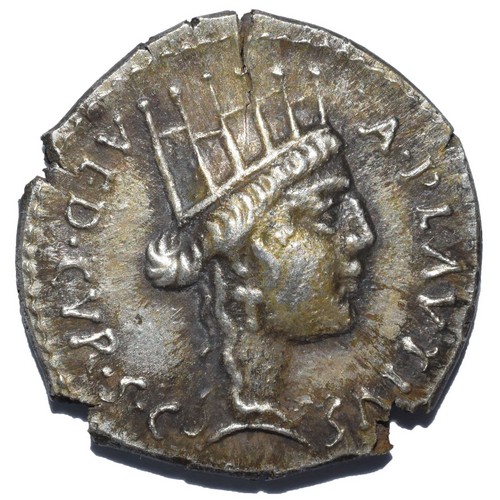 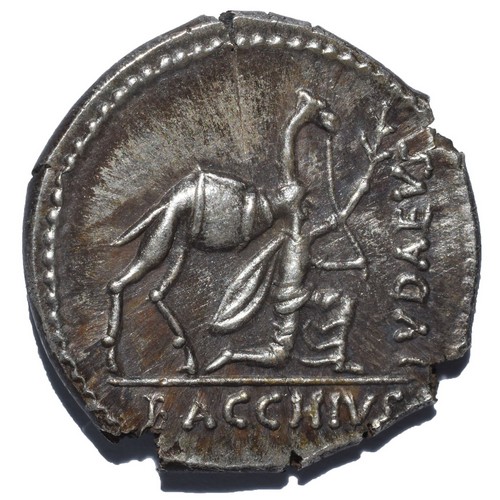 The gens Plautia was a plebeian family. The reverse interpretation of this denarius is still debated but is commonly accepted to be Aristobulus of Judaea who was held captive by Pompey.
This type refers to the submission of Aristobulus, younger son of Alexander Jannaeus, to Pompeius Magnus in 63 BC; Aristobulus brought a train of camels loaded with gold as part of his “peace offering” after Magnus intervened on the side of Aristobulus in the civil war of 66-63 BC. This offering included, according to Josephus, the gigantic golden vine that had been set up in front of the temple doors to the Temple of Solomon.
In 66 BC at the outset of civil war in Judea, whilst under siege from his older brother (and rightful ruler) Hyrcanus, rebel Aristobulus managed to send an envoy to Pompey’s representative in Syria, Marcus Aemilius Scaurus. The Jewish leader promised ~8,000 kg of silver, a bribe of roughly two million denarii, in exchange for Roman intervention, the pretext for Roman intervention was ostensibly that Aristobulus’ rival (and brother) Hyrcanus had enlisted in the aid of the Persians. When Pompey arrived on the scene, he received an even larger present: Aristobulus sent him a golden vine of weighing some 800 kg, which Pompey forwarded to the temple of Jupiter in Rome.
Shortly afterwards, however, Pompey had Aristobulus arrested, ending his rivalry for the kingship held by Hyrcanus. Aristobulus had either had the gall (if he was lying) or the naivete (if he was truthful) to accuse Scaurus of extorting the two million denarii bribe from him in exchange for Roman assistance. The golden vine is mentioned by Strabo as being in Rome during time of Augustus, so evidently no attempt was made to repatriate the golden relic given away to the Romans by a rebel usurper. This Roman invervention in Judean affairs would continue to take on a more ominous note over the next hundred and thirty years, while more and more of Judaea’s golden treasures wound up in Roman hands.
DESIGN:
Obverse side
Turreted head of Cybele to right
Legend:
A. PLAVTIVS AED. CVR S.C

Reverse side
Aristobulus as Bacchius kneels to right, camel at side, extending olive branch
Legend:
IVDAEVS on right, BACCHIVS in ex.